There are two playable games. In the main menu, select either "Franks and Goths" or "People's Conquest."

People's Conquest is an improvement but also needs more work and lacks a tutorial.

Fight off the Goth invaders in a battle royale turn based strategy game. Save as many Canadian towns as you can.

This is a fast casual strategy game. Each map is randomly generated and each game takes ~15 minutes to play. You will likely lose most of the time.

Produce Infantry for your backbone, produce armor for flanking, fighters against other fighter, bombers, and for scouting, local supply to reinforce local units and a supply unit for distant reinforcement from combat losses.

Infantry units get artillery when stationary for one turn. Facing matters and can be controlled by clicking which "sub tile" the unit is on in the upper right." Facing north defends against north but exposes your south side to rear attack. Don't get outflanked.

Combat is intended to be established front lines with local buildups to breakthrough and get to flanks with armor. Capture neutral cities to get more cities easier.

Unit strength is measured by size/kapital/skill.

More size = stronger, more kapital = higher quality unit, and skill comes from combat experience. Reinforced units maintain most of their skill so there is an incentive to keep the units you have rather than get them destroyed. 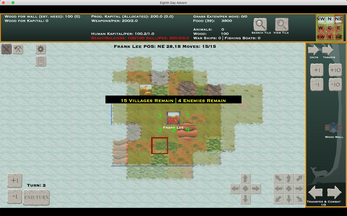